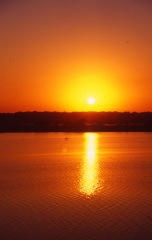 What a day! Fist I thought it would be just another boring day on the bus, but boy I was so wrong. As I previously wrote, usually there weren’t lots of people on the Baz-Bus, but this time was different. When we left Durban, all of the seats where already taken and almost everyone was heading for St. Lucia Backpackers. An American girl (Katherine) was supposed to leave the bus just outside Durban but decided to stick with us since we were already having great fun just after 30 minutes on the bus. A group of eight complete strangers from around the world who didn’t know each other when getting on the bus. So the whole bus ride. was just a “Where are you from, what are you doing etc. kind of thing. Soon after my arrival in St. Lucia I realised that they probably picked the wrong name for the hostel since I would rather call it St. Weed Backpackers then St. Lucia Backpackers. But that’s about all I’m going to write about this subject since I don’t want to get into legal troubles. The hostel was an excellent choice, not only the location was great and the facilities were in good condition, but they also offered different activities during the day and some times also at night . Right after our arrival they took us to the beach and organise a volleyball game. And at night you could hang out at the bar and “get pissed” as Katherine called it. And there was braa (South African for Barbecue) every night. You just had to buy some steaks (incredibly cheap) at the local supermarket and grill it.