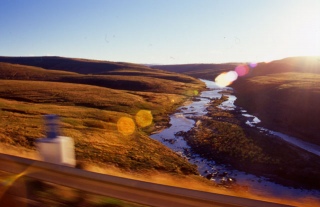 Another day on the Baz-Bus, this time for 13 hours in a row, I passed some really nice beaches and sometimes I just wanted to jump out of the bus to join the others that where leaving. But lucky me, about half way through I met a Australian girl, Kim from Cairns, again, who was travelling with me on the Baz-Bus when I first left Cape Town. She had been in the Transkai for a couple of days to teach at a small school and now was also heading for Durban. We where the only passengers on the bus, so we had plenty of space and lots of time to talk and watch movies.

The Transkai is a very hilly area, with little round huts virtually everywhere. At one point of the trip, Kim and I where just jumping around in the bus, filming and taking pictures of the beautiful scenery. She had a video-camera and a Rexlex-camera just as me and we started laughing at each other because we felt like Japanese tourists. The driver (Jetty) was very friendly and since neither Kim or I had made a reservation he called Banana Backpackers and made the booking for us.

Funny little storie upon my arrival in Durban:
Can you tell the nationality by someone else’s shoes? A German guy thought so and when I entered the Banana Backpackers claimed that I’m Scandinavian. Well, I might be tall, and at the time I was in South Africa I even had bleached hair, but that doesn’t make me Scandinavian.27th May, Durban
After the 13 hour trip on a bus on the previous day there was nothing to keep me away from spending the day on the beach, doing nothing but watching surfers riding the waves and catching a tan. At night I went to cinema with a South African girl. First the bar-keeper told us to not go to the cinema and take a taxi instead, but then the receptionist told us that it would be fine and we should just carry the money for the movie’s. I guess thats kind of a South African paranoia… Instead of taking a 2 minute taxi-ride we decided to run to the cinema. We left the hostel and started running when a truck stopped next to us and offered us a ride to the cinema. We hopped on the back and arrived at the cinema in no time. Since there was no one selling tickets at the cinema, we just walked into a movie called “Half Past Dead” (I did not talke that as a bad sign) and didn’t pay at all. That’s what I call a cheap night out. Unfortunately, two English travellers got mugged that night at 4 am in the morning, just outside the hostel. But they where also lucky, the robbers where friendly, told them their names and asked kindly for their money and even gave them back their drivers licence.