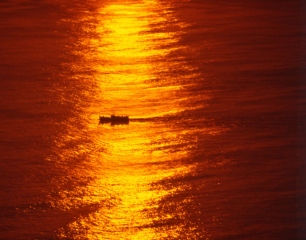 Camps Bay was on my “To do” list for this day, instead of taking a Rikki I decided to walk there, which took me about an hour. I passed some really nice an awful expensive villas. Sometimes beautifull looking, brown tanned woman did there morning-sport and I felt like in an episode of Baywatch. I was brought back to reality when I saw a black man climbing up the embankment. He didn’t asked me for money or anything, just smiled at me and walkd by. I looked down the embankment and found his home, an old blanket, lots of newspapers, some wood and other stuff which create his home. A rat was going through his “stuff” andit was such a strange scene. This men lived in Camps Bay, the most expensive area of Cape Town. Two different world within 200 meters.

I continued to walk to the main beach, which was very crowded and after a short rest took a Rikki back to Sea Point.

In the late afternoon the guy from England and I tried to hike up Lions Head, to watch the sunset. Unfortunately, he was vertigo and had to give up after only 500 meters. I made it half way up, but then I realised that I wouldn’t make it up to the top and back in time before darkness falls, so instead I enjoyed the wonderful sunset on my way back and promised myself to climb the top another time.