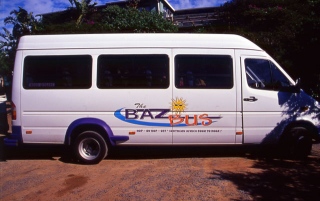 After four fabulous days in Cape Town, it was time to leave. So I just spent one long day on the Baz-Bus to Knysna, with lots of movies and some fellow travellers. Baz-Bus wasn’t like I expected it, instead of a big coach it was a small Mercedes Bus with space for about 12 people. All of the people got out of the bus earlier then me, but I ended up meeting them again later on my trip. Knysna was actually bigger then I expected, with a small shopping centre at the so called “Waterfront, lots of shops at the main street and even a small cinema. The best thing about Knysna was that it was save, I was able to go to cinema at 10 pm and walk back at midnight without having to worry of being mugged.