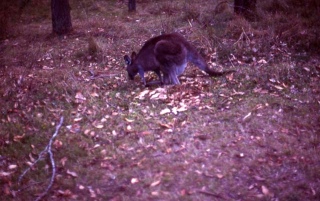 18th of August to 20th of September, Magnetic Island
Three days on the island next to Townsville. Almost every place in this area was named by James Cook (or after him) and so was Magnetic Island… When ‘good old James’ sailed by this island the ship’s compass went funny… anything else you need to know? By the way, highest mountain on the island is – Mount Cook – I’m wondering where that came from…

I also met Jane again, for all of you who haven’t followed my trip so far, I met Jane first on the tour to the Kakadu National Park. Magentic Island offers a lot of cheap hostels for backpackers, I stayed at Geoff’s place at Horshoe Bay, (fifty dollars for two nights and return ferry ticket).

Unfortunately it was very cloudy during my stay on the island, and instead of spending my time on the beach I did some hiking. Magnetic Island offers some very interesting hiking trips.

My favourite was ‘Arcadia Walk’ which is about five kilometres, once you made it up to the top of the hills you get rewarded with a scenic few over the island.
My last bus ride in Australia, from Townsville to Cairns, took me trough an amazing rainforest and some very interesting villages, such as “Mission Beach”. Mission Beach is a very famous place for backpackers among the east coast. Unfortunately I was in a hurry and couldn’t spend some time there so I just got of the bus for a short walk and to look around. Five people where already waiting to pick up backpackers, one of them dressed like Bob Marley, wearing a fancy hat and hairs like he had never washed or cut them in his life.

I arrived in Cairns in the early evening, similar to Mission Beach, a lot of people where already waiting at the bus station to offer accommodation. Unfortunately I had already booked at the Central YHA and it seemed that the YHA was the only hostel to not offer a courtesy bus, so I had to walk there. Even on the way to the hostel cars would stop by and ask me where I was going to stay and offered me a lift to other backpacker hostels.

I finally arrived at the YHA after a 20-minute walk. It was quit hot that day and I was already a bit upset that the hostel didn’t offered a lift, but to make the whole thing even worse, the stuff was quit unfriendly. This is the only time I’m going to do this, but I do not recommend staying at the Central YHA in Cairns. The atmosphere was very impersonal, the stuff in a bad mood during my whole stay and every time I wanted a mug for a cup of coffee or a fork or spoon, I had to go to the reception to borrow it from them.

I mostly stayed in YHA in Australia during my trip, and the stuff was most of the friendly, especially in Darwin, Adelaide, Sydney and Alice Spring, but I regret that I stayed at the Central YHA in Cairns.

I better change the subject before I go and phone the hostel in Cairns… There is also a very funny story I want to share!

21. September, Cape Tribulation
One-day tour to the world heritage rainforest… Air-conditioned 4wd vehicle, swim in crystal clear water, delicious lunch including tropical fruit, just to name a few specifications in the brochure about the tour I was doing that day. A small coloured brochure and the cheapest tour to Cape Tribulation, I was looking forward to a day with fellow backpackers and perhaps, some nice girls. Oh boy, I was sooo wrong! First of all, I was the only backpacker on the tour, all other tour members got picked up at cheap places such as Courtyard by Marriot… But there is more to come! Eight of them (four couples by the way) where in their late 60s or even early 70s, dressed nicely and wearing shoes like they where going to a party. Sounds like fun? What about a gay and lesbian couple? Unbelievable?

I promise this is absolutely true! I have to confess they didn’t tell me that they where gay or lesbian, but the behaviour of both couples were just too obvious. Especially the gay couple… I don’t want to share too many details, but the whispering of the older people and their strange views nearly got me to the point where I wanted burst out loud. Somehow I managed to resist this temptation. But back to the tour, I do saw some very interesting stuff that day, not only on the bus! Our first stop was at the Daintree River, were we had a guided tour about the wildlife in and around the river. The tour guide was very funny, and kept making jokes all the time. I saw some crocodiles and birds, and, for the first time in Australia, snakes that where actually alive – but not poison at all. I was always told that the most dangerous animals live in Australia, but I have to admit, haven’t even seen one of those animals (beside the crocodiles).

We continued our tour with a visit at the Mossman Gorge and an interesting rainforest walk. After lunch we finally arrived at Cape Tribulation. Cape Tribulation was actually named by an old friend of mine, – James Cook, who had some serious troubles with his ship in this area (it ran onto the Endeavor Reef). He got really upset and decided to name a few more spots, such as Mt Sorrow, Weary Bay and the island Hope (he thought he could fix his ship at the island).

After a very nice walk at the beach of Cape Tribulation we finally headed south, back to Cairns.. On the way back we stopped at the “Daintree Ice-cream Company”, which sells excellent ice-cream made from fruits that grown in the area, our last stop was at a sugar cane factory. Before the tourists arrived in this area it’s major income was the manufactory of sugar. Nowadays it’s still a very important part of the economy in the region and there are plenty of sugar cane fields along the road. between Cairns and Cape Tribulation.