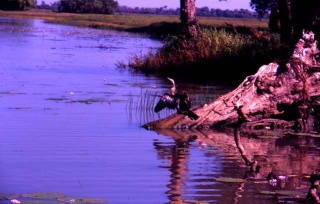 22nd of September, Cairns back to Darwin
After my adventures at Cape Tribulation and a relaxing morning in Cairns, the time had come to say ‘Good Bye’ to Queensland. I have to admit, the time had passed by really fast, but on the other hand, the two weeks travelling from Brisbane up to Cairns and Cape Tribulation where full of unforgettable moments. After a last walk around Cairns I finally made my way to the airport. For me, it was the first time checking in and going on a plane after the events of the 11th of September. Even in Cairns, thousands and thousands of miles away from New York or Afghanistan, the security-procedure had change.

Everything with even the little possibility to be used as a weapon had to be removed from hand luggage. But more important, I had changed too. I was certainly much more aware of what was going on around me; I thought about everything in my bag that could be used as a weapon. I also started looking at other travellers that where sitting around me. I felt bad for checking out other people, but on the other hand, I just couldn’t find anything else to think about. There weren’t a lot of people at the airport at all; you might have heard that one of the largest carriers in Australia, Ansett, had collapsed. Some shops and the fast food restaurant were closed and had notes on the door that, due the collapse of Ansett, and the lack of passengers that came along with that, they couldn’t open for business. I was really lucky that I had booked a flight with Quantas in Sydney before Ansett went bankrupt.

The flight wasn’t a non-stop flight; we landed at “Nhulunbuy” or Gove, a little airport in the middle of nowhere. Most of the passengers where highly surprised when the stewardess announced that we would land in “Gove”, a place most of us never heard of before. Nhulunbuy is about half way between Cairns and Darwin. As far as I could find out, an airport founded during the Second World War. The whole airport was a very small building, a shop with souvenirs and two little check-in counters. I saw an old Apple Computer, like from the late 80s, but that was the only piece of technology at the airport. After the short brake in “Gove” we finally continued our flight on to Darwin.

23rd of September, c
I wanted to finish my tour around Australia with something special, something to remember, funny and not too much driving at all (which means, by the way, “only” 350 kilometres that particular day). Something really rare in Australia… Litchfield seemed to offer all that, and, fortunately it kept its promises, lots of waterfalls and the opportunity to swim in crystal clear water. It took me 8 tours in Australia to finally get a female tour guide, and she did a real good job. We started at the Florence Falls, also our first opportunity to swim, but a group of drunken “party-travellers’ kept me away from my first refreshment because they had occupied the whole pool. But the “Wangi Falls”, offered an even better opportunity to swim and it was also less frequented. Next on the tour was an short hiking trip to the Tolmer Falls, closed for swimming because of bats that life in a cave at the bottom of the falls. Our last chance of refreshment was at the Buley Rockholes, a great spot to get an excellent “aqua back massage”. Just sit in one of the holes and let the water ran over your back! The last stop was at the “Magnetic Termite Mounds”, an area with many termite hills, the biggest one more then six meters high (about 21 feet).

After the return to Darwin I decided to visit the weekend market at Mindil Beach. I unfortunately had to watch a quiet nasty scene between two Aboriginal. First I saw a group of Aboriginal, sitting on the street, playing their didgeridoos and singing to make some money. Very peaceful compared to those Aboriginal I had seen downtown in Darwin, Alice Springs and Cairns. When I returned later, one of the Aboriginal men was arguing with a woman about the money, and finally screamed “Give me that f****** money!!! It’s really sad to see that so many Aboriginal have problems with alcohol, or are just sitting around in the city and arguing with each other. I hope they find a way to a new kind of “Aboriginal Culture”. I don’t think they can go back to the old times, but I’m sure they can live their old traditions and at the same time find a new way of life.

24th of September, Sweet home Alabama…
I knew that day would come, but it was hard to finally leave Australia, this wonderful country/continent/island or however you would call it – where I spend almost six weeks, where I travelled more then14.000 kilometres, where I met new and old friends, and most important, wouldn’t have to carry around toilet paper with me all the time (like I had to Thailand).

I knew the Airport in Darwin, I had been there twice, but this time it was like hell on earth for me. I was waiting at the check-in counter, when a old men passed by, stopped, turned around, looked at me and said: “Where ever you go, you’re not gona make it” How would you feel about something like that? I was confused, a bit scared, thought about the possibility to not go on the plane, looked at my right site and realised that three guys from Pakistan where standing beside me. I didn’t knew anything about those people, just that that they had passports from Pakistan, but it increased my fears a lot. I have nothing against people from Pakistan or any other country in the world (including Iraq and Afghanistan), but it was just not the right time to see them checking in for the same flight. To make this situation even worse, I switched on my CD player and the first song to start was “Sweet Home Alabama” (singer died during an air crash). But, as I’m typing this, sitting in the youth hostel in Bangkok, you should already know that everything went fine. I don’t believe in fate (but I was relieved when the plane finally landed in Bangkok), I don’t trust in old stupid men, I had a nice chat with the guys from Pakistan and I switched of my CD player.