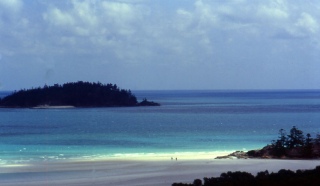 13th of September to 14th of September
It’s hard to describe what I did between the 13th and the 14th of September, the two days I had to wait in Airlie Beach, before I could go on the boat for the sailing trip. How do you describe doing nothing, and at the same try to make it sound interesting?
But here is the true story: I spend most of the time at the beach or walking around. That’s about all I did those two days. It’s hard to go for a swim, from October until May its simply forbidden because of the jelly boxfish, a very deadly animal. Most of the people just spend there time on the beach, catching up a tan, or, if they spend to much time on the beach, a sunburn.

Friday night was finally the night I got on the boat, together with eight other travellers and 7 crew members. Yep, SEVEN crew members to take care of nine people. The reason for such a big crew was because two of them were in training and the skipper (captain) was with his wife. A very funny and nice crew, Daniel, a very funny bloke (Aussie for guy) , was our dive instructor, Clyde, the master diver, Hanna and Helen, who spend most of the time in the kitchen, Mike, who was training to be a skipper, and finally Peter, the skipper and his wife Nelly. To name the other travellers on the boat: Phillip and Christian (from Germany), Sarah, John and David (from Sidney), Steven (from USA), and finally Matt and Julian (from the UK). The name of the boat was “Romance”, ironically, eight of us nine were male…

15th of September
The 15th of September, which we most spent at the Bait Reef, started with some swimming around the boat, watching and feeding huge fishes. I was able to catch the fin of a big black fish, but the fish went mad and was able to get rid of me. Later Nelly told me that those fishes do attempt to bite people who disturb them. Lucky me…

I don’t have a diving license (yet), so the only things I could do on this tour was to snorkel and do a resort dive. Daniel took me out to the reef and I snorkelled around for about 1,5 hours. The underwater world of the Great Barrier Reef is just amazing, very colourful corals all over and an uncountable amount of fishes and other animals. We where also lucky to see a “bad tide” a natural phenomenon that happens about 5 times a year. A very strong low tide makes the top of the reef become visibly upon the water surface.

But the snorkelling wasn’t the major event of that day, it was my first “resort dive”. After some instructions from David about how to use the diving gear, the time has come for my very first real underwater experience. I learned how to get rid of water in the mask while diving and how to breath. We first started with some breathing exercises and then made our way down to the ground by using the rope of the anchor. I always had to equalise the pressure in my ears, which was not such a big problem then I thought. We went down about ten meters and I was able to see an amazing “wood” of corals for the first time of my life. The whole diving trip lasted for about forty minutes, and I have to admit, one of the best forty minutes in my life! If you go on a sailing trip at the Great Barrier Reef, do at least a resort dive! You don’t need any experience in diving but it would be handy if you are able to swim 😉 !The day continued with some sailing to a place called Mantaray Bay, where the diving team went for a night dive. On the way to Mantaray Bay I was able to see dolphins as they swam along the boat and jumped out from time to time, just like in Titanic.

16th of September, Whitsunday Island
Captain Cook himself named the island after he sailed through them on Whit Sunday. It wasn’t actually Whit Sunday when he sailed through them, because he didn’t thought about the fact that he had crossed the international Date line. We stopped at the island and hiked up to “Tongue Point” (I wonder where that name came from…) to get the best view for “Whiteheaven Beach”. Whiteheaven Beach is about six kilometres long, white sand and blue water, as far as you can see. Unfortunately we had only two hours there, not enough time to enjoy the full beauty of the beach. The reason why this beach did not became my “perfect beach” was the fact that it was the only beach in this area where people got killed by sharks (two shark attacks within one week). The rest of the day was again sailing as we wanted to reach South Molle Island before it would get dark. The day ended with some drinking games, such as “Captain Cook took his first drink”, I’ve never ever…, I kiss the ping little pig on… etc.

17th of September, South Molle Island
My last day on the boat – unfortunately… We stopped at the South Molle Island before we sailed back to Airlie Beach. South Molle Island, which lies in the heart of the 74 Wthitsunday Island has it’s own golf course, some very nice walking tracks and a huge swimming pool. Most of the crew stayed on the “Romance” while we (the travellers) enjoyed half of the day, relaxing at the swimming pool and exploring the island. It was really hard to leave this pacific paradise to sail back to the “real world”. The day ended as many tours ended before, the crew went out to a bar with us and we chatted about the days we had spent together, changed email addresses and had a few beers together.