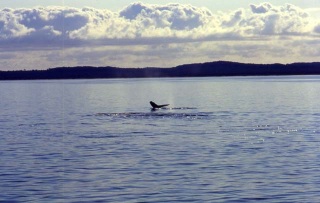 Half of the day on the bus, listening to Travis – The invisible band, my favourit CD on this trip… I guess most of the people don’t know Hervey Bay, but if I mention Fraser Island, probably everyone will say “Ahhhh – biggest sand-island of the world! ” Right, and Hervey Bay is the place you arrive at if you want to explore Fraser Island. Hervey Bay itself doesn’t offer a lot, a bit of beach, a bit of nightlife, but nothing real important. The real impressive happening in Hervey Bay takes place between about 6:00 and 8:30 pm. Thousands of “fruit bats” huge and scary-looking animals occupy the sky.

12th of September,
I don’t feel in the mood to write about what happened in Brisbane, instead I decided to share my day at Harvey Bay, Fraser Island. The day started very early, at 4:00 am. I didn’t had a clue at this time about what had happened just a couple of hours before on the other side of the world. I first got the news on the boat, and thought the tour guide made a very sick joke. But I wasn’t sure… He was too serious, too much details, so I took my binoculars and looked at the TV-screen of another boat across the pier. I saw a fire-fighters and started to believe the story of our tour guide. Yet, it was hard to believe.

We then started our tour to watch one of the most beautiful and peaceful creatures in the world, whales, to be exact ‘hunchback whales, the fifth largest animal in the world. The first whale I saw was jumping out of the water, a very powerful moment. We later watched a group of four whales and followed them about 2 hours before we had to go back.

The five hours on the boat went by very fast, we all talked about the possibility of the story the tour guide told us, if this could be true.

All my fears came true when we finally got back to the harbour and I first walked into a restaurant which had the TV set switched on. I had planed to rent a bike that day, to go around Hervey Bay, but that was impossible for me. Instead I spend the whole day at the hostel, following the shocking news from New York. I have a relative in New York, and of course the whole Worldsurface crew, which I knew work at Wall Street.

It was a big relive to read that the whole worldsurface team was doing well, and I feel very sorry for all those, who where on the planes, in the World Trade Centre or at the Pentagon. Thanks for updating the page and sharing your thoughts, even during such a horrible event!

Hervey Bay was a very quiet and strange place that day, everybody was talking about what had happened that day, and a taxidriver told me it was the most quiet day for him ever since. It’s hard to believe what happened, I know that the world has changed that morning, it’s never going to be the same again.