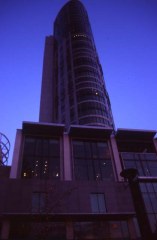 8th of September, Botanical Gardens, Arriving in Brisbane
My last day in Sydney, which I spend mostly at the Royal Botanical Gardens. It was a sunny day and walking around in a green surrounding was, for my opinion, the best thing I could possibly do.

One of my favourite spots in the park was a walk that explains the history of Sydney.It showed the history of the white people in Sydney and on the other hand the Aboriginal point of few. For example: James Cook discovered Australia in 1770, the Aboriginal comment related to this note:
They (white people) say he discovered Australia, but we never lost it!
By the way, did you know that more then 700 convicts where among the first settlers which arrived in Sydney? I finally left Sydney at 6:30 p.m. to go to Brisbane, after eight wonderful days, with lots of great impressions.

9th of September, Brisbane
Days in Bris-Vegas, or the story ofhow I saved some bucks in accommodation, thanks to my mate Severin who currently studies in Brisbane. I arrived in Brisbane on the 8th of August, and after my first night, which I spent at a Irish pub in ‘Garden City'(a shopping and entertainment centre). Brisbane got it’s second name (Bris-Vegas) because of it’s active nightlife. Active nightlife…

On the 9th of August, my friend showed me around Brisbane and it’s most important sights which included a the city hall and a ferry ride on the Brisbane river. If you have some time in Brisbane, visit the New Farm Park , a very nice spot to relax and have BBQ or something like that. Later that day we visited the final ceremonies of the Goodwill Games, a major sport event in Brisbane. This included a INXS concert (the rest of the group with a new singer) and a huge fireworks. Good fun and best of all, for free.

10th of September, Campus
I spend a couple of hours in front of a PC University, to keep up with my writing for Worldsurface and to send some emails to my friends, which hadn’t heard from me for a while.