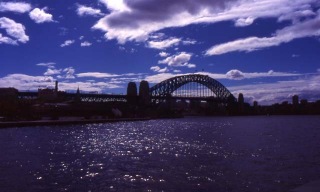 5th of September, Harbour Bridge Walk, Darling Harbour
My day started with a walk on the infamous Harbour Bridge. I guess there is no way to escape from it if you want to claim that you “have been” to Sydney. I didn’t climbed the Harbour Bridge, which is a 150 Dollar experience, instead I paid 5 bucks to walk up the stairs of the observation tower, which is just as nice.

Next was Darling Harbour, home of the IMAX Cinema, Sydney Aquarium, Chinese Gardens, the National Maritime Museum, the casino and some other major attractions. I spend about 3,5 hours in the Aquarium, walking around and watching the amazing and very colourful examples of Australian Marine life. They got some amazing underwater tunnels there and the sharks do really look very scary. Since the casino was very close to the Aquarium, I just walked over and tried some of the slot machines. Fortuna seemed to like me that day, I won 20 Dollar, walked out of the casino and had a nice dinner.

6th of September, Yoga lessons in Avalon
Wondering about the topic? To enlighten you: Avalon is a beautiful suburb of Sydney and a friend (the one I met in Bangkok) is currently living there. It’s also a nice trip by bus (or ferry) along the coast. My friend showed me around Avalon and we had a nice walk down to the beach.

I had a terrible cold that day, and needed tons of tissues, but after some yoga practice (my friend is a superb Yoga teacher) I felt much better. It was by the way my first experience in Yoga, and I recommend it to everyone who spends too much time in front of the computer (or TV).

For those who’ve never heard about Yoga: Through controlled breathing, prescribed postures (called asanas), and meditation, Yoga seeks to enhance the prana, the so called life force, that resides in the body and achieve a state of balance and harmony between body and mind.

My balance and harmony between my body and mind is now in a perfect condition and my cold was gone the very next day! 🙂

7th of September, Newtown
It was time for some changes, and I already had visited the important sights of Sydney so I wanted to get a closer look at one of the suburbs of Sydney, I decided to walk to ‘Newtown’, which is situated about 30 minutes north-east of the youth hostel. The suburb is very nice and not as expensive then the downtown area. The buildings look quiet old (like from the 70ties) and you can buy nearly everything you can imagine. I found a cool second-hand book shop with an huge selection of great novels and non fiction as well just on the main street.