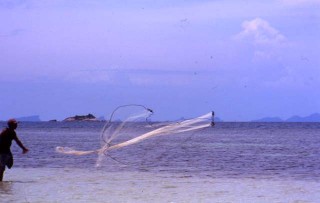 We rented a motorcycle (150 Baht) to cruise around the island and find out what the other beaches have to offer. Sandra, the German girl, turned out to be a very good driver, so I didn’t have to worry and could enjoy the beauty of the island. We stayed near Thong Sala at a small bungalow village and from there we took the road along the coast all up the northern part of Ko Phangan. Most of the roads are in good condition, but unfortunately the island is very hilly. Sometimes I had to jump of the bike so Sandra could make it up those hills. The Thai People always laugh at us. I think its unusual for the guy to sit on tha back and let the  girl do the driving.

I have to admit that the northern beaches are much more beautiful then southern beaches. Far less tourists and sandy beaches. In the South you get a lot of mud an corals (I got scratches all over my feet). Around 4:00 p.m. we arrived at Haad Rin, the mass-tourist part of Ko Phangan. The whole town is one big “party” and is well know for the “Full Moon Party, which was just three days before we arrived on the island. After dinner we went straight back to our bungalows on the other site of the island.

12th of July, Ko Pha Ngan, Hiking to Long Beach
Since the weather was very fine, Sandra and I decided to do a “beach walk” up to the “Long Beach” (very nice place!) which we had discovered just the day before. It was a 10 kilometre walk, most of the beaches on the way were in a horrible condition, lot’s of rocks and dirt. Just the last two kilometres before Long Beach turned out to be a little bit more friendly. Not knowing about the distance back to our bungalow on the road (15 kilometres..) we decided to do some “hitchhiking. Three or four kilometres, roasting in the sun and tired of walking up and down the hills, we decided to use a taxi instead. Hitchhiking seems to be not very common on the islands.. 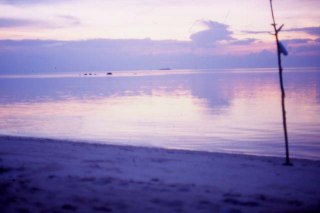 The past three day where really enjoyable. Much better then the hot, busy and crowded Bangkok. On the 7th of July I took the night-train to Surat Thani. To use the train is not that bad at all, they have air-condition and you even get shower on the train (second class). After the arrival in Surat Thani, I took the ferry to Ko Samui.

I spent the last two nights in Ko Samui. The Island of Ko Samui is a place I don’t recommend at all. They have all the stuff you get all around the world, Mc Donalds, Starbucks, they are already opening up a Burger King (!!) And – it’s very expensive compared to Bangkok. Although, the beaches are really nice and I got sunburned while I was walking from one end of the beach to the other… (Ouch).

10th of July, Ferry to Ko Pha Ngan
Today I took another ferry to Koh Pha Ngan, which is less touristiy then Ko Samui. I got an bungalow next to the beach (just a few steps) which I share with an German girl I met in Bangkok (Sandra).

I had an very funny afternoon. I met a twenty year old monk next to our bungalow. We “talked” for about three hours, (it took me 15 minutes to find out that he asked me for a coke) and he showed me different ways of Thai Fighting” .

After Sunset Sandra and I decided to get something to eat and we walked along the beach to the next town, which took us about 30 minutes. We just had dinner and are now about to walk back to our bungalow. I will spend the next three days in Koh Pha Ngan, do some hiking trips and may rent a motorcycle before I go to Trang, which is a city in the very south of Thailand. 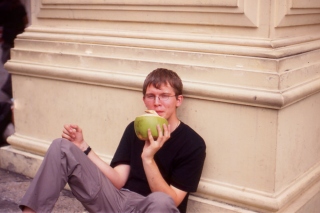 I just arrived at the Bangkok International Youth hostel. Wow – this is going to be my first report to all of you – so what can I tell you?

I spent my last evening in Austria in Vienna, together with my Cousin. We went to a “Biergarten” named Fischer Braeu. For me the last chance to eat a original “Wiener Schnitzel” and a cold beer (or two…)
My last night in Austria was quit strange, four different dreams and every time I missed that dam plane! Thank god those dreams didn’t come true, I went to the airport early, got my tickets and had my first take-off to Zurich. I left Zurich at 3:00 p.m. and went straight to Bangkok.

The flight was quiet comfortable, I was sitting next to two young Swiss girls so time passed by pretty fast. A very funny short-story: Whenever I asked the stewardess for a “Coke” she smiled at me, and handed me an “Orange Juice”. But beside that little misunderstanding, it was a very enjoyable flight.

Arriving in Bangkok, after 11 hours on the plane went along with an unfortunate surprise. My luggage didn’t make it to Bangkok, it decided to stay in Zurich. Fortunately it will arrive later today. I’m a very optimistic person and I look at this in a very positive way: I didn’t have to carry “the BIG bag” trough the whole city. He He. Well, on my way to the hostel I already met a local – Rudi – I’m going to meet him again in the afternoon to talk about Austria (right – I’m a very trusting person).

5th of July, My first day in Bangkok
I spent my first afternoon waiting at the hostel for my luggage, talking to other travellers. At 3:00 pm I met Rudi again who invited me to his home. We talked about this and that, but mostly about Austria and his work. He is a “croupier” at a cruise ship, and married to an Malaysian woman. I was also invited to eat at their house, but after more then 28 hours without sleep my stomach just said NO.  I spent about three hours at Rudji’s house before I went back to the hostel.

I was still without my luggage, so I had to wait until 9:00 pm. Not being tired at all at this time, I decided to join a few other backpackers (two guys and three girls) to go to Patpong, which is one of the most famous “sex-districts” of Bangkok. We went there by Tuk Tuk (70 Bhat) which took us about half an hour. For me, Thailand and Bangkok was always known as a place for sex-tourists, walking around at Patpong, I found out that it’s not soo bad at all. You get invited to see sex shows quite frequently, but if you say “No thanks”, they leave you alone.

After about 1,5 hour we decided to go back to the hostel by taxi (120 Bhat). So, after about 36 hours without sleep, I went to bed for the very first time in Bangkok.

6th of July, Train Station Bangkok
A very relaxing day, we first went to the train station to get a train-ticket for Surat Thani, and then we took the Bus Nr. 29 to go – well where ever it would take us… It took as through the whole city. To explore Bangkok by bus is really recommendable, it’s only 3.5 Baht a ride, and you can see the whole city.

7th of July
We went to the “Grand Palace”, a very impressive place, but since I’m coming back to Bangkok later this month, I did not spend much time there.