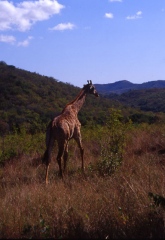 My only intention to go to St. Lucia was to see the Hluhluwe Umfolozi National Park. Many fellow travellers had told me that it was much better then Krueger NP and since I was short in time I decided to skip Krueger NP. Hluhluwe Umfolozi is a Malaria area, just like the Krueger NP, but since it was Winter in South Africa there were no Mosquitoes and the risk of getting an infection was pretty low. And as we speak – I wasn’t bitten once during the entire three weeks in South Africa.
To get to Hluhluwe Umfolozi was an arctic nightmare, not only getting up at 3:30 am in the morning, but also sitting on an open truck and fully exposed to the wind with just a thin blanket to protect you, was a real pain in the a**. The freezing morning aside, the day in the park was breathtaking, with lots of elephants, water buffaloes, giraffes, antelopes, warthog, well, pretty much everything South Africa has to offer expect lions and leopards, which didn’t show up at all expect on postcards.