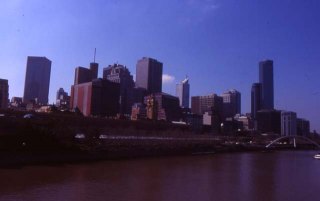 29th and 30th of August
The second largest city of Australia is on the one hand a very modern city but on the other hand still keeps a very special European flair. In the year 1835, John Bartman bought the area from Aboriginal people. He died soon after his deal, and John Pascoe Fawkner was the driving force behind the new settlement, nowadays well know as Melbourne.

Australian city’s have such a short history, for example my home village in Austria (Ulrichsberg) – It was founded in 1325, more then 675 years ago by a priest named Ulrich and it’s current population is about 4000 people. Melbourne was founded about 175 years ago, now it’s a city three time’s bigger then Vienna (capitol of Austria), which has a history that goes back to the Roman Empire.

But back to my short visit in Melbourne… Of course I spend some time at the Crown Casino, the biggest of it’s kind in the Southern Hemisphere. Altogether I lost a whole dollar at a slot machine, shame on me… If you are on a short budget (or lost all your money at the casino) and don’t want to walk, there is a free tram operating from 10:00 am to 03:00 p.m. It operates around downtown and you get an explanation of the most important sights.

A visit at St Kilda beach was also on my list of “Must Do’s” and I ended up as an photo model for a bunch of girls, (they where working on a school project). I was on a pier when one of the girls walked over to me and asked if they can do pictures of me… Nothing else to do I agreed so the girl hugged me and the other girls made a bunch of photos. I wonder what this school project was about…

The Royal Botanical Gardens were my last major sight of Melbourne. I enjoyed a cup of tea in the cafeteria and explored the huge park, which took me nearly three hours.

31st of August, Melbourne to Sydney
Trip to Sydney on a Firefly bus (40 Dollars). There is nothing much to say about the time on the bus, expect that we once stopped at the biggest Merino of the world (Wow…) and that one of the guys was constantly fighting with the bus driver.