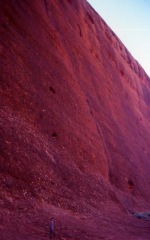 20th of August, Bus to Alice Springs
I had to leave Darwin at lunch time to go 1500 kilometre south, to Alice Springs. A never-ending 22 hour journey.Luckily the bus was comfortable!

21st of August, Alice
A 22 hour journey on a bus is an “experience”, I never thought my back could hurt that much! It takes about 15 minutes to get from the bus terminal to the youth hostel. Not being in the best condition it seemed like an eternity to me.

Many Aboriginal live in Alice but sad to see lots of them sitting on the street’s doing nothing the whole day or even worse, drinking alcohol most of the time. I tried to talk to some of them, but it seems that they avoid talking to foreigners. A local told me that they get money from the Australian government, so they don’t have to work. All the bottle shops (the place you can buy alcohol) are closed the day they get their money.

22nd of August, Kings Canyon, Sunset at Uluru
Start of my two-day journey to the heart of Australia. Peter, the guide on the two-day trip and Glen (my former tour guide) had two things in common: Both sang a lot and loved Pulp Fiction. Peter was about to enter a Karaoke contest the following Friday, so he kept training the whole time. As soon as we left Alice, I realised that the “Red Center” was more a green garden then a dessert. Lots and lots of various flowers, green gras and beautiful trees created amazing scenery. It had stopped raining just a week before I got to Alice and spring was just about to start. The got lots of rain the past few years, very unusual for this region.

Our first stop was Mount Ebeneser, about 250 kilometres west of Alice, a little gas station with an Aboriginal Art gallery in the middle of nowhere. Our second stop was King’s canyon, where we hiked on top and had a look into the canyon. The first white owners already thought about tourism in this area so they choose names such as “Lost City” and “Garden Eden” to attract travellers.

After a two-hour hike through the canyon we headed on to the Uluru, to watch the sunset. It was really awesome to see “The Rock” changing into all this different kind of red’s. We where also able to see Kata Juta (the Olga’s), which looked like Homer Simpson, lying on his back (seriously!).

23rd of August, Uluru, Kata Juta (Olga’s)
We had to get up early, to watch the sunrise at Uluru. As you may know, the Aboriginal doesn’t want you to climb Uluru as it is a very religious place for them. Many people got hurt or died trying to climb and the Aboriginal feel responsible for them. I respect the rules of the Aboriginal and decided to do a walking tour around the rock instead. Which was very good decision.

Kata Juta was our next stop. It’s a very important place for the Aboriginal man, as they go there to “teach” younger men. After a last stop to take pictures at Uluru we went all the way back to Alice.