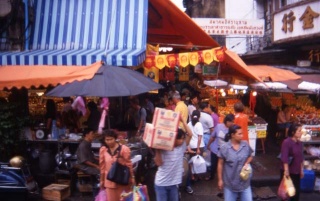 12th of August, Birthday of Queen Sikirit
The whole town was very quiet and nearly empty on that day, except the Phramane Ground next to the Grand Place. That’s where the celebration for the birthday of the queen took place. I went there in the late afternoon and I have to admit:I’ve never seen such a big birthday party. There was a huge fireworks around 8:00 P.M. and maybe eight stages with different shows and music. I even was able to see the king and the queen.

13th to 14th of August, Relaxing…
Two relaxing days in Bangkok, I spent most of the time at the youth hostel to talk with Promvit and other travellers. Every time somebody arrived at the hostel, Promvit pointed at me and said “He is a volunteer, ask him if you have any questions!” A nice couple from Ireland (Joanne and Shane) had a lot of advises concerning Australia, so I re-planed my Australia-Tour. On the 14th of August I visited the Vinamek Mansion, the biggest golden teak house in the world, really impressive and worth to be seen.

15th of August, Million Miles Away
The final day, they played Offspring’s “Million Miles Away” during take off in Bangkok, which was, for my opinion, a very good sign. Singapore was a five hour stop on the way to Darwin but the time passed by pretty fast since the airport has a lot to offer (city tour, cinema, food-court etc.).