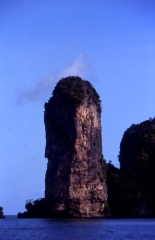 13th of July
Another day on the motorbike. We went up to the north again. We drove until the we couldn’t go any further. Sandra wanted to relax on the beach and I decided to climb up some rocks. It took me an hour or so to get to the top of the rocks, but the scenery was wonderful. I felt like a little Robinson.. I could see the next beach, which wasn’t reachable by motorbike, and it looked like on one of those Postcard-Beaches or Movie scenarios. Awesome!! Around 6:00 pm we decided to go to Hat Rin once more, to see what the ” Half Moon Party” was like. It wasn’t a big party at all, just a small group of people, hopping around on the beach…

14th of July
My last day in Ko Pha Nang. Also my last day with Sandra and Zlatko, the two other travellers who I stayed with the past 9 days ( I may meet Sandra again later this month) . Sandra wanted to stay on the island and Zlatko is flying over to Europe as I’m sitting in this Internet-cafe right now. Since I had to wait the whole day to get on the night ferry to Surat Thani, I just walked around in Thong Sala and had a few drinks.

The night ferry left Thong Sala at 10:00 pm. I might come back on the 4th of August, to see what the “Original Full Moon Party” is like.

15th of July, Bus to Trang
The night ferry from Thong Sala arrived at Surat Thani at 5:00 am. A mini van picked me up at the pier and took me to another place, where tourists where already waiting for their busses. Three mine-van’s and two different bus-stations later, I arrived at the same place again, and the guy at the bus-office told me that I can go to Trang… WOW! And this day was just about to start!

It took about two hours, to get a town where the driver dropped me of and told me that I need to get a motorcycle-taxi and go to another bus station. OK! I was to tired to fight and tell them that I paid for a trip to TRANG. Fortunately I got on a bus to Trang. But after my arrival in Trang, I had to found out that no one ever heard about a Youth Hostel in or around Trang.

A friendly police men took me to a mini-van station, and then I was on my way to Had Yao, the place I thought I would find a nice Youth Hostel. At least I thought so.

The mini-van driver took me to a small “resort” next to the beach. I met other travellers from Denmark, who where also “stranded” in the middle of nowhere. Shortly after my arrival, a horrible storm came up (monsoon, as the owner of the so called resort told me a hundred times). The storm lasted for about three hours. After a short walk around in the rain I was also able to find the youth hostel, just about a ten minute walk away from the “resort”.

I and the travellers from Denmark decided not to stay at the “resort” and luckily found a minivan which brought us back to Trang. Since the weather down here is in a horrible condition, I’m going to leave this place tomorrow, to go to Malaysia, or to Ko Phi Phi. …